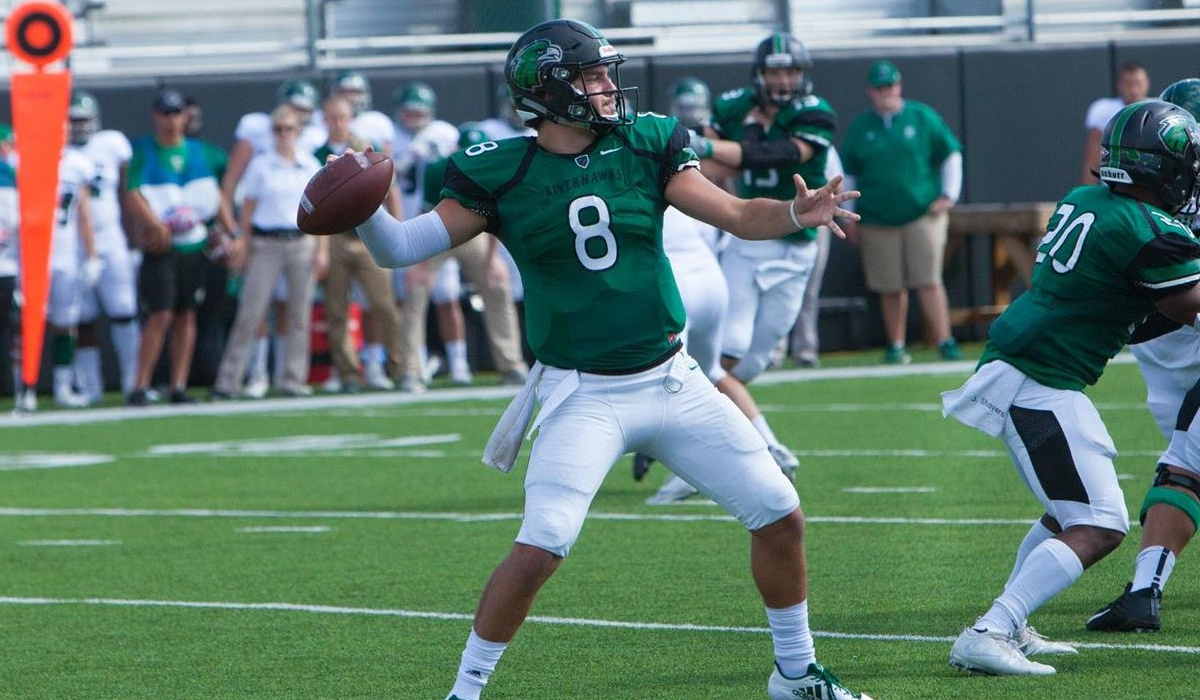 Trinity Benson, East Central, WR, Sr.
Benson is a member of a large senior class looking to go out strong under new head coach Al Johnson. He stepped into a much bigger role as a go-to in 2017 and took advantage of it, leading the team in receptions and receiving yards and should be able to build on that this year.

Shamari Brooks, Tulsa, RB, So.
D’Angelo Brewer is gone and Brooks looks to be the one to step into the lead role in the backfield. There is a solid stable of running backs along with him, but a good steady season from Brooks could go a long way to help whichever QB that rises to the top lead the Hurricane return to a winning record.

Joel Carlos, Southeastern, K/P, Sr.
Carlos is on pace to become the all-time leading scorer at Southeastern. Last year, he was a two-way all-conference performer in the GAC – on the first team as a kicker and on the second team as a punter.

James Cox, Langston, LB, Jr.
In his first season at Langston, Cox made his presence known quickly in the CSFL, racking up 5.0 tackles per game and helping his team to an undefeated regular season. The Lions now move to the Sooner Athletic Conference and will need Cox to build on last season’s numbers, which include 6.5 tackles-for-loss and an interception returned for a TD, to try to take the first-ever SAC title.

Alex Figueroa, Central, LB, Sr.
The senior knows how to read the play and is a force to be reckoned with. He led the Bronchos with 11.0 tackles-for-loss and had 5.0 sacks last season to go with an interception and a fumble recovery.

Casey Freeman, Southwestern, QB, Jr.
Freeman is looking to keep the starting QB role as the Bulldogs have a new head coach in 2018. The junior is learning the offense well and will have some help with experienced receivers like J.R. Omigie and Jared Rayburn with him again in the fall.

Justice Hill, Oklahoma State, RB, Jr.
It has been easy to think about the success of the passing game at OSU during the last decade. But don’t forget that the Cowboys had the Big 12’s leading rusher in 2017 with 1,467. He tallied 15 rushing TDs as well. With back-to-back 1,000-yard rushing seasons on the resume, Hill will demand attention from opposing defenses.

Nathan Leithead, Oklahoma Panhandle, LB, Jr.
The Aggies’ defense was stout in 2017 and should be strong again in 2018. Leithead led the way for OPSU in tackles at 69 and had 10.5 tackles-for loss. He also forced two fumbles and had an interception.

Daniel Moniz, Oklahoma Baptist, LB, Sr.
Moniz didn’t lead his team in tackles in 2017, but he made the most of the tackles he recorded. The then-junior made his way into opponents’ backfields with frequency, and more than 21 percent of his 47 tackles (10.0) were tackles-for-loss.

Kyler Murray, Oklahoma, QB,
Murray would be a player to watch this season anyway to see how he can follow a Heisman-trophy winning team leader like Baker Mayfield. But this season looks to be only one in which fans will be able to watch Murray play football at OU, as he will be heading off to the Oakland A’s for a baseball future at the completion of the year.

Jacob Spady, Southern Nazarene, QB, Sr.
He is a two-way threat, able to both run and pass well, which is the kind of quarterback that Coach Lambert can use in his offense. Spady was involved last season in an incredibly balanced attack, which saw him run 175 times and pass 185 times and record 10 rushing touchdowns and 11 passing touchdowns.

Darran Williams, Northeastern A&M, RB, So.
Last year, the Golden Norse continued its trend of having a strong ground game. Williams is the leading returner from that squad and first-year coach Zach Allen has said that the sophomore may take the lead in the backfield this year.

Maurice Wright Jr., Northwestern, LB, Jr.
As a sophomore, Wright led the GAC with 13.0 tackles per contest and hasn’t shown signs of slowing down. He has recorded 212 tackles through his first two seasons in Alva, 19.5 were tackles-for-loss.

Cade Yeager, Northeastern State, QB, So.
Yeager had the red-shirt tag pulled midway through last season and started the final seven games for the RiverHawks. As a sophomore he looks to take the helm, but will have many new faces around him as the leading rusher and leading receivers from 2017 have graduated.