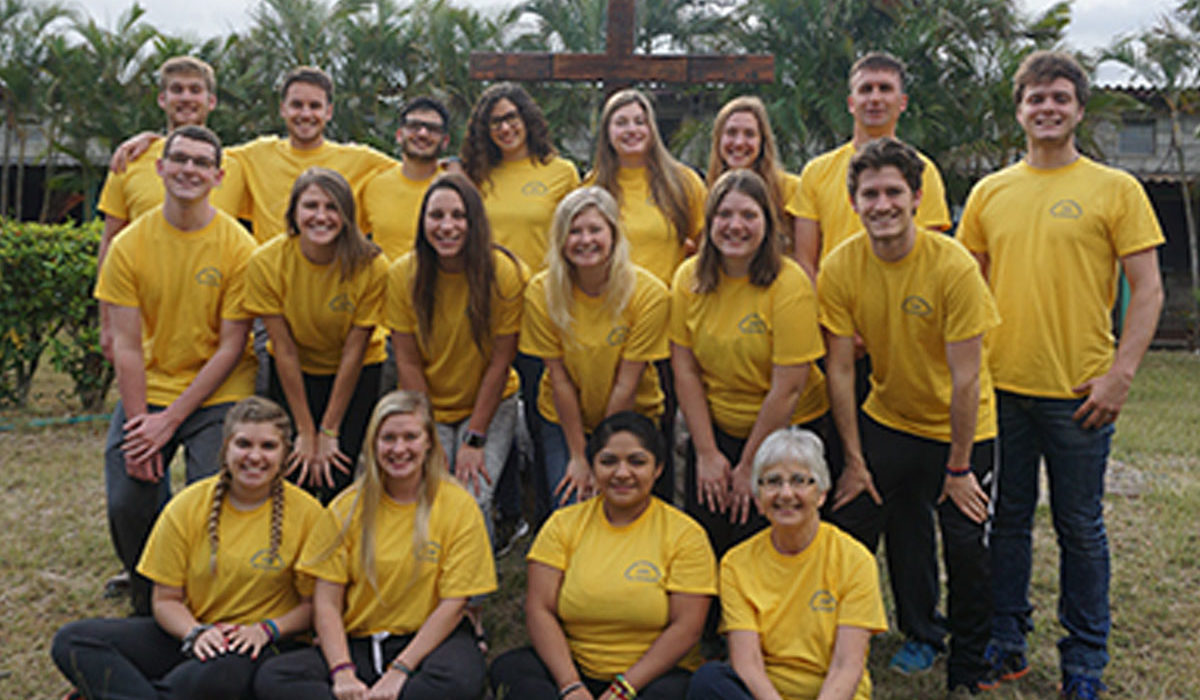 A group of Briar Cliff University students recently traveled to Honduras to volunteer with APUFRAM (Association of Franciscan Girlstown and Boystown), an organization that runs boarding schools for both elementary and high school students in the country. Among the volunteers were representatives of 11 Charger athletic teams.

Students at APUFRAM are mostly orphans or come from very poor families. The Briar Cliff group spent most of its nine days in Honduras working in these students’ dorms, as many of the rooms needed significant improvements.

“We completely refurbished the rooms by sanding down desks, benches, shoe racks, and the bunk beds,” said junior women’s golfer Abby Brinkman. “We painted the furniture white and the walls in the rooms were painted two shades of blue. The bunk beds were stained and rebuilt. By the end of the week when we were finished, the rooms looked completely different.”

At the end of a day of working, the group spent time playing soccer with local children. Although these children spoke only Spanish and the majority of the Briar Cliff group spoke English, it was still a memorable experience.

“Connecting with the kids throughout the week was difficult because of the language barrier,” said Nate Frankman, a junior men’s soccer player. “But being able to bond with them through sport was such a cool experience.

“Being able to help them forget about their daily struggles for a while was extremely powerful.”

The Briar Cliff volunteers also spent a day at a bilingual school in Comayagua, a town near where they were staying, to spend time with students there. Briar Cliff alum Rita (Fachman) Machato is a teacher at this school.

“We were able to go to a middle-class elementary school and interact with the kids,” Brinkman said. “It was very unexpected to go to this school and hear the high school kids talk about going home after school to either play video games, read, play outside, or sleep. It was like getting little glimpses of America a couple times.”

Women’s volleyball sophomore Luisa Ramirez served as a translator between the Briar Cliff group and the Spanish speakers it interacted with. She decided to join the trip as a way to give back.

“I wanted to repay a favor,” she said. “In 2017, a hurricane hit Puerto Rico, my home country, and many came to our aid. I thought it would have been hypocritical of me to not help another country when others had helped mine.”

Although Honduras is regarded as a poor country, the students found the people they met to be full of joy. For Ramirez, the most surprising part of the trip was observing the way of life.

“Ignorantly, whenever I thought of a third world country, I would think of an endless terrain filled with warfare,” Ramirez said. “Through my time there, I realized that there is peace, playfulness, and joy. I have learned that a simpler life is a better life. What we consider to be ‘poor’ is not deprivation. I have learned it to be a humbler way of living.”

“The simplicity of life that they live was incredible,” Frankman said. “They do not have much, but they do not strive to have the nicest things. The most important things for the people we met is that they have what they need to get them through life and that their family is healthy and together. The newest and nicest things do not intrigue them and that is something that I think we all can learn from.”