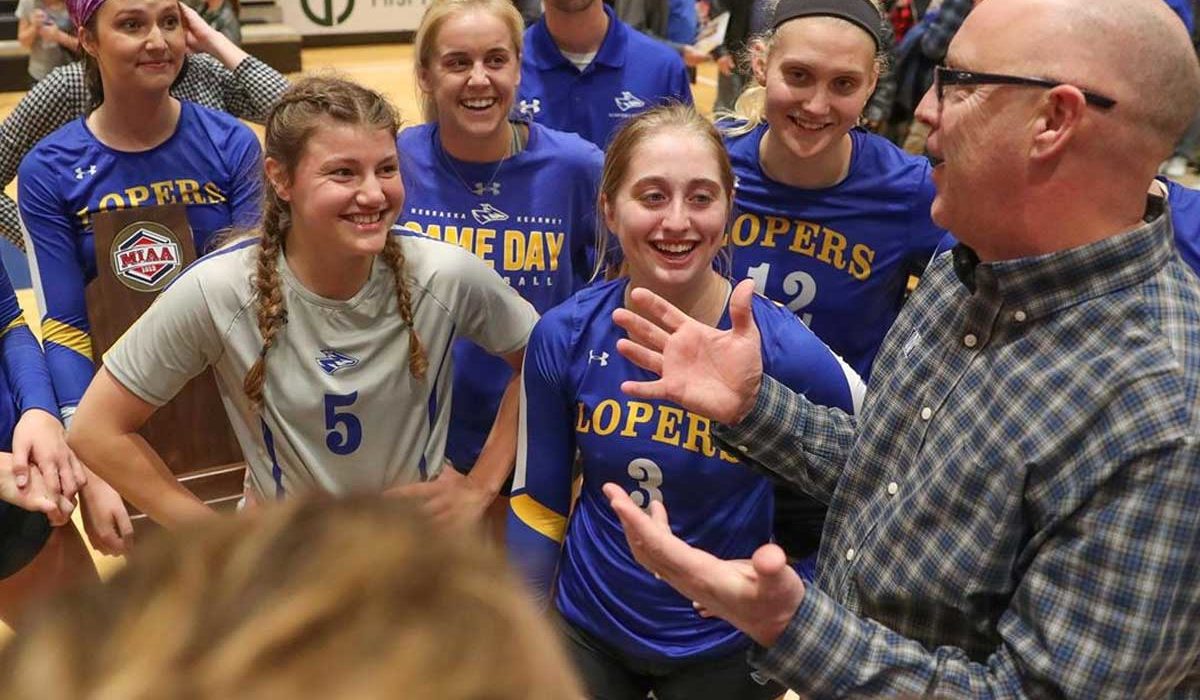 KEARNEY, Neb. – When the Squiers family gets together, volleyball is rarely a topic of conversation.

Nobody is talking about an upcoming match, lobbying for more playing time or critiquing the last practice. For the most part, it’s a “no-volleyball zone.”

“I try not to bring it up,” said Rick Squiers, head volleyball coach at the University of Nebraska at Kearney. “We all probably get enough of that, and I think the lines are already kind of blurred when you have me coaching and my daughters playing.”

Away from campus, Rick focuses on being dad to daughters Anna and Maddie, both starters on the 11th-ranked UNK volleyball team.

“He’s pretty good about that,” said Anna, a junior middle hitter who led the Lopers in blocks and finished fourth in kills last season.

Of course, everything changes when he’s inside the Health and Sports Center, where Rick has won 352 of 372 matches over the past 20 years, including a pair of 66-match winning streaks.

“I don’t really think of him as my dad when I’m on the volleyball court,” said Maddie, a redshirt junior and co-captain who takes over as UNK’s starting setter this season.

Rick makes it a point to separate the two roles, but even he admits that’s easier said than done. Playing the part of supportive father and successful coach is a balancing act he’s still working to perfect.

“There are complications I wasn’t prepared for,” Rick said. “There are more moving pieces when your kids are involved.”

He speaks from experience.

Jordan, the oldest of six Squiers siblings and an all-state volleyball player at Kearney Catholic High School, was a backup setter for the Lopers for three years.

“I learned a little bit about the difficulties through that process,” Rick said.

Things are different this time around, though, as Anna and Maddie are both competing for significant playing time. Rick understands his decisions impact the entire team, not just his daughters, and they expect him to approach every situation that way.

“He’s not the type to favor his daughters, which is good,” said Anna, a two-time all-conference second team selection in the Mid-America Intercollegiate Athletics Association (MIAA) as a volleyball player and NCAA Division II national qualifier in the discus throw for the UNK track and field team.

Rick’s approach to coaching his daughters is far from nepotism. If anything, he’s tougher on the sisters.

“I have to remind myself that they’re not in an easy spot either, because I’m fairly demanding and not always the most patient person in the world,” Rick said. “One of my goals is to just step back and be nicer.”

His wife Kim has certainly heard some complaints about dad over the years, from youth sports through college. It’s her job to assure the kids this tough love serves a purpose.

“If he stops getting on you, that’s when you should worry,” she said. “If he’s on you all the time, it’s because he knows what you’re capable of.”

Even Kim, the proud mother who will be watching nervously during every match this season, catches herself in coach mode.

“Rick has to remind me sometimes to just be the mom, because I kind of swing into that role,” she confessed.

Having mom in the stands and dad on the sidelines can increase the pressure, the sisters say, but they’re used to high expectations.

EARLY START
The three older Squiers siblings, including Jordan, all participated in collegiate athletics, with David playing football at UNK and Becky playing basketball at Rockhurst University in Missouri.

Anna and Maddie started attending UNK volleyball matches when they were babies, began playing the sport as soon as they could walk and joined a competitive club team when they were in elementary school.

“I can’t remember not playing volleyball,” Maddie said. “We’ve been around it our entire life. I couldn’t imagine anything else.”

At Kearney Catholic, Maddie was part of four straight state championship volleyball teams and Anna played on three of those squads. The sisters also won a state basketball title and excelled in track and field, with Anna earning state champion and state runner-up honors in the discus throw and Maddie qualifying for the state meet in the long jump and triple jump.

The Squiers siblings weren’t pushed toward sports, but their former college athlete parents definitely weren’t going to talk them out of it.

“Our standpoint was always find something you like and work hard at it. If it’s sports, great. If it’s something else, that’s great, too,” said Rick, who played basketball and ran track and cross country at Simpson College in Iowa, where his wife was a member of the women’s basketball and track teams.

Maddie, who switched to setter during her senior year at Kearney Catholic after Shayla Conner left for Washburn University, took a different path.
UNK already had an established setter in Lindsey Smith, who finished her Loper career with the fifth-most assists in school history. That put Rick in the awkward position of recruiting one daughter, but not the other.

“It was dicey,” he said with a smile. “It was not always fun and games in the Squiers house.”

Maddie enrolled at Bellevue University and made an immediate impact, helping the Bruins reach two NAIA national tournaments. She was named the American Volleyball Coaches Association (AVCA) NAIA Freshman of the Year and North Star Athletic Association Freshman of the Year and was selected twice as an all-conference and All-North Central Region first team performer and AVCA Second Team All-American.

The communication disorders major transferred to UNK in January 2018 and redshirted last season.

“It all worked out perfect,” Maddie said.

“I had it planned out the whole time,” Rick quipped. “Now we have kind of a veteran newcomer taking over the setter position, which is a good position to be in.”

Having one of the most successful volleyball coaches in NCAA history doesn’t hurt either.

COACHING LEGEND
Maddie calls him “a good one,” a pleasing answer to her father that’s also a pretty big undersell.

One of just three head coaches in the history of UNK volleyball, Rick has amassed a 637-88 record since he began leading the Lopers in 1999. UNK has qualified for the NCAA Division II national tournament in all 20 seasons, reaching the Elite Eight three times, and claimed 25 regular-season and conference tournament titles during his tenure. He’s a 10-time conference coach of the year and three-time AVCA regional coach of the year.

Including his six years at Hastings College, Rick has 847 victories and just 147 losses as an NCAA and NAIA head coach. His .852 winning percentage ranks fifth nationally among active coaches from four-year schools with at least five years of experience at the Division I, II or III levels – that’s four spots ahead of Nebraska’s John Cook – and his win total is ninth on the active list and 18th all-time.

Those numbers are part of the reason he’s remained in Kearney, and community support is the other part.

“UNK volleyball is unique,” he said. “Fans are really knowledgeable here, they care about the program, they follow the players. When I talk to recruits, I always tell them it’s not like this everywhere. It’s a pretty special place when it comes to college volleyball.”

It’s even more special when that success comes with your daughters on the court.

“Not many people get to experience that, so I probably need to stop and appreciate it more often,” Rick said.

The tournament field consists of five teams with matches scheduled for 10 a.m., noon, 2 p.m., 4 p.m. and 6 p.m. today and Saturday in the Health and Sports Center.

In today’s matches, UNK faces Adams State University at noon and the University of Findlay at 6 p.m. On Saturday, the 11th-ranked Lopers have a noon contest against Oklahoma Baptist University and 6 p.m. match against Augustana University.