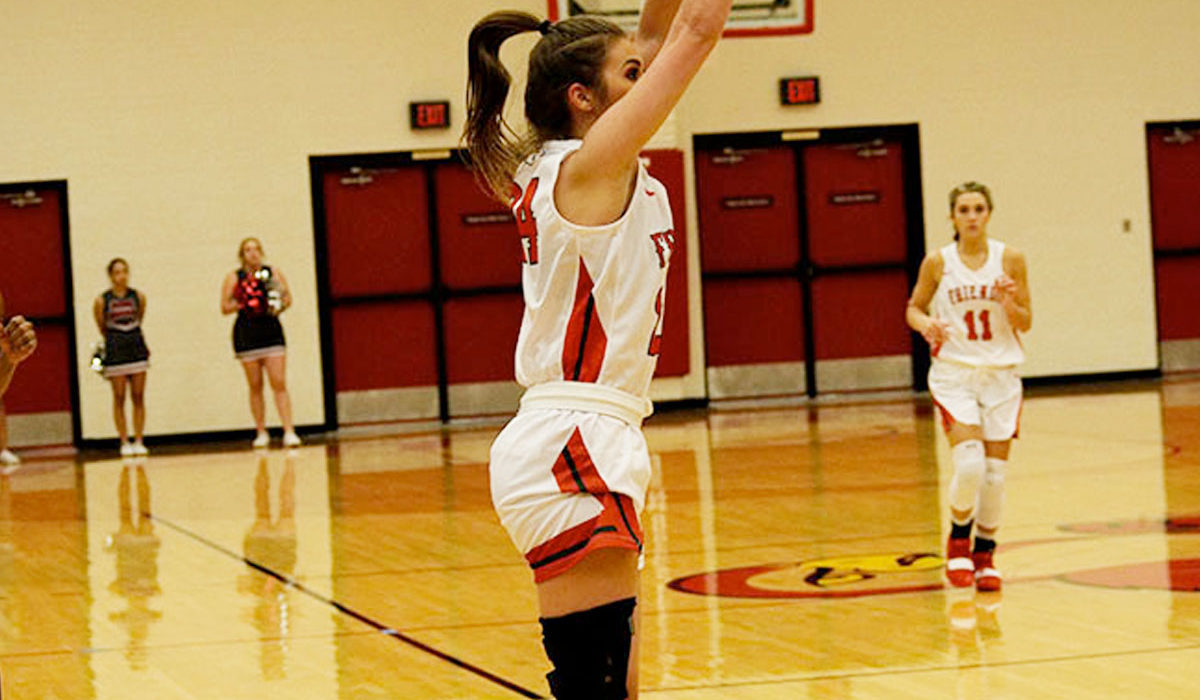 WICHITA –After both teams slogged through offensively for much of the night, the Friends University Falcons saw the ball go through the net at the most opportune time as Lexi Evans (SR/Austin, Texas) drilled a game-winning, corner three as time expired to give the Falcons a thrilling 60-59 victory over the Bethel College Threshers in an important KCAC matchup Saturday night inside the Garvey Center.

The win moves the Falcons to 7-4 in the KCAC and into sole possession of the fourth spot, one game ahead of Bethel.

“I thought we could have played a lot better but to come out with a win is huge,” Friends head coach Heather Howard said.

The Falcons were put in a tough spot when Karlie Schroeder drove and scored to answer Khadijah Kelly(SO/Arlington, Texas)’s game-tying bucket moments earlier and put Bethel in front 59-57 with 4.6 seconds left.

Laramie Edens (SR/Ada, Okla. ) was then looking for a shot attempt but was tied up with just 0.5 seconds left.

That turned out to be plenty of time for Evans to catch an inbounds pass from Naria Hall (JR/Wichita, Kan. ) and knock down one of the biggest shots of her career.

“It just felt good to be back and to be able to hit a big shot for my team,” Evans said.

The Falcons got off to a good start behind seven points from Daija Styles (SR/Carrollton, Texas) and a stingy defensive effort from the outset, forcing the Threshers into missing nine of their first 10 shots from the field to lead 14-9 at the end of the first quarter.

With the lead standing at one point at the 5:03 mark of the second period, Laramie Edens and Naria Hall teamed up to help the Falcons extend the edge.

Hall assisted on an inside score from Edens before Edens picked up a steal and found Hall underneath for a bucket.

Edens then scored on a nice turnaround jumper to give the Falcons their largest lead of the half at 26-19.

But Kayla Newman scored six points to spark an 8-2 spurt over the final 2:50 bring the Falcons’ lead down to 28-27 at the break.

Styles led the Falcons with 13 points, with Hall winding up with 12. All nine of Evans’ points came from three-point distance, with obviously none bigger than her game-winning trey. Styles also had a team-high seven rebounds along with a team-best tying four assists.

The Threshers were paced by double-doubles from Abby Schmidt and Jade Brown. Schmidt scored 15 with 14 rebounds, while Brown had 13 points and 16 boards.

“For the most part our defensive effort was great and the girls were locked in to the scouting report,” Howard said. “I’m proud of the team for continuing to battle to the end!”

Friends was outrebounded 55-39 overall, but still outscored the Threshers 38-20 in the paint and had a 21-9 edge in second chance points.

The Falcons will now turn around and host conference newcomer Avila University Monday evening (Jan. 7) at 6 pm inside the Garvey Center.