Hot start aids No. 18 DWU past No. 8 Morningside 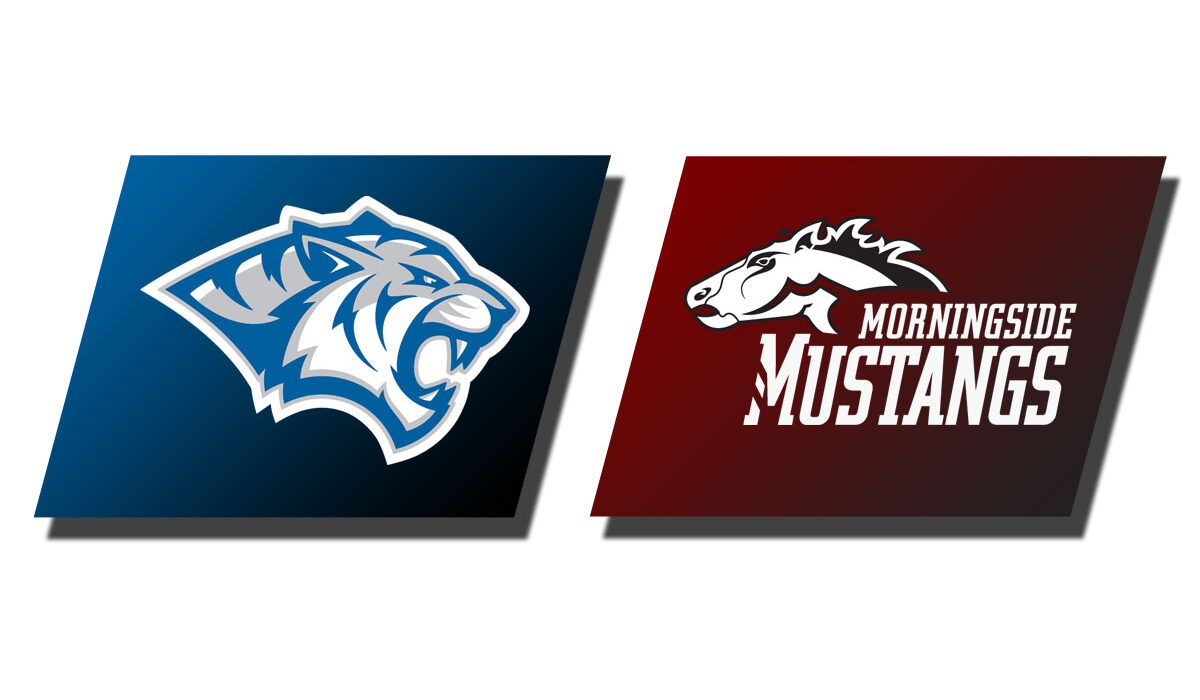 SIOUX CITY, Iowa – Thanks to nearly shooting 54% from 3-point range in the first half and a career night from senior guard Nick Harden (Chicago, Ill.), the No. 18 Dakota Wesleyan University men’s basketball team handled No. 8 Morningside College, 75-60 in a Great Plains Athletic Conference top-20 battle Wednesday

A pair of acrobatic layups by Harden kicked off the scoring to put DWU up 4-0 early on. Mason Larson (Langford, S.D.) made back-to-back baskets to keep the lead in the hands of the Tigers (10-1, 7-0 GPAC).

The Mustangs (10-2, 6-2 GPAC) put together a quick run to grab a 10-8 lead momentarily. However, Sawyer Schultz (Emery, S.D.) found Harden from behind the arc for a 3-point basket to hand the lead back to the Tigers.

A Zach Imig layup gave Morningside a 12-11 lead, but this would be the last lead of the game for the Mustangs. DWU put together a 12-2 run over the next four minutes, highlighted by a pair of Schultz 3-pointers to force a Morningside timeout.

The hot shooting continued as Ace Zorr (Harrisburg, S.D.), Larson and Harden each buried shots from downtown. The Tigers made an effort to score in the paint as Jeffrey Schuch (Dell Rapids, S.D.) made two layups to push the lead to 16 points.

The Tigers finished the half on another run, this time with a 13-2 spurt to hold a 43-22 lead at the intermission.

After a pair of Koln Oppold (Sioux Falls, S.D.) free throws, Harden knocked down another 3-point basket to give the Tigers their largest lead of the game of 24 points. The Mustang offense began to find their rhythm as they made three-straight 3-pointers and went on a 10-0 run.

After a DWU timeout, Harden put an end to the run with a shot from beyond the arc. Both teams stalled from the field midway through the second half until Schuch made a jumper.

After Morningside cut the DWU lead to 11 points, Oppold buried a deep 3-pointer to fend off a comeback. However, the Mustangs attempted one final rally thanks to a 5-0 run to cut their deficit to single digits for the first time since the first half. But the Tigers converted their free throws down the stretch to close out the contest and continue their 10-game win streak.

Defense again controlled the game for DWU, forcing 11 turnovers while holding Morningside to just 32.3% shooting from the field. On the offensive end, the Tigers shot 47.3% from the field and scored 30 points in the paint.

DWU plays its final home game of 2020 hosting Midland University at 6 p.m. on Saturday in the Corn Palace.