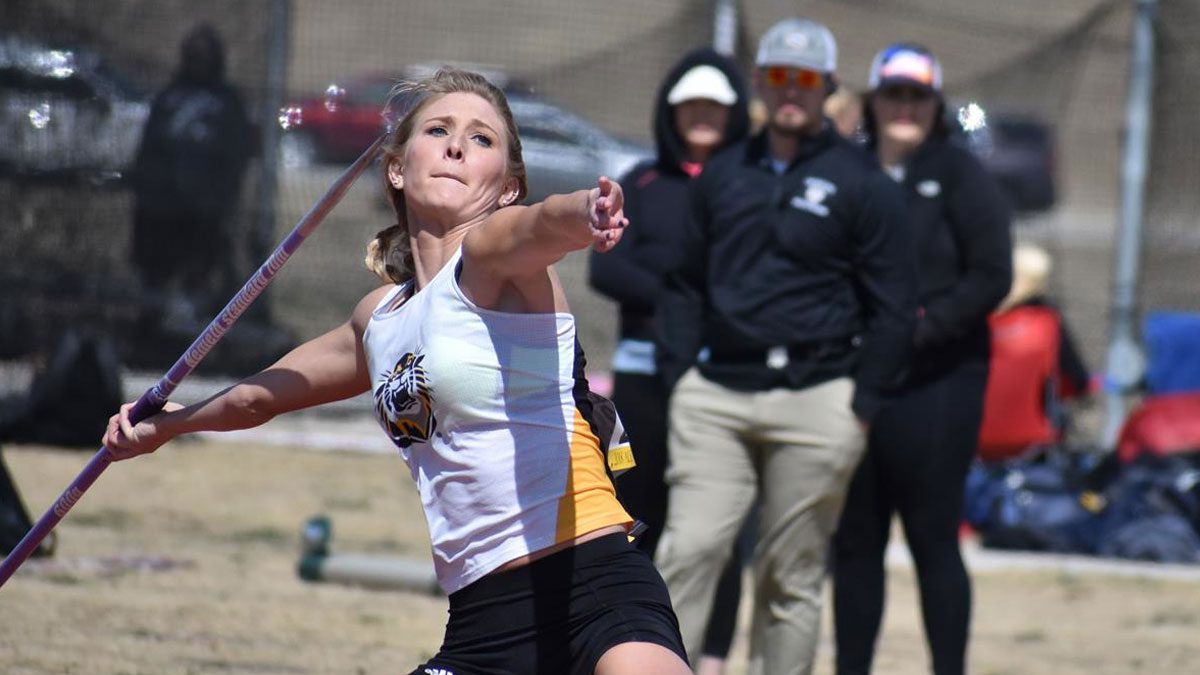 HAYS – In its one and only home meet of the season, the Fort Hays State women’s track and field team dominated their home turf at the second annual Alex Francis Classic. Eight Tigers won their events, as well as the team taking home the title.

At the Classic, the Tigers walked away with seven provisional marks.

On the track, Fort Hays State ran away from the competition in multiple areas. The 100-meter dash saw the Tigers taking the top-five finishes, including a first place finish from Amber Forbes at 11.65. Kelly Wycoff was right behind in second at 11.69 and Yanoudji Diarra took third with a time of 12.05. Both Forbes’ and Wycoff’s times were strong enough for provisional. It was much the same in the 200-meter dash as Wycoff (first, 24.33), Forbes (second, 24.56) and Diarra (third, 25.21) swept the top three spots. Wycoff’s 200-meter run also granted her a provisional.

Lindsay Roberts took first in the 1,500-meter run with her time of 4:47.73, while her sister Lauren claimed fourth at 4:54.42. In another long-distance event, Yessenia Gonzales took the 3,000-meter steeplechase, crossing the line and battling the water with her time of 11:53.80. The 4×400 relay team composed of Sharee Zombo, Diarra, Forbes and Wycoff captured first place with their mark of 4:05.93.

Switching to the field, the Tigers continued their dominate performances. Selam Ball jumped to first-place in the pole vault with her mark of 12 feet, 3 inches, good enough for a provisional. Rohey Singhateh claimed the top spot with her jump of 18 feet, 5 inches. Madison Wolf continued to be the one to beat in her event of the javelin, as she earned a provisional with her throw of 148 feet, 3 inches. Alexcia Deutscher was behind Wolf in second place at 143 feet, 10 inches, followed by Amanda Hurla in third place completing a 118 feet, 8 inches throw. Courtney Geiger just missed out on a first place finish in the discus, but still managed to claim a provisional, as well as tie the FHSU record at 159 feet, 9 inches.

Summer Kragel finished in second place in the high jump with her mark of 5 feet, 5 inches, with Robin Ritsema coming in third at 5 feet, 3 inches and Haley Jones recording a fifth place finish at 5 feet, 3 inches. Mariah Hammersmith earned the third place title in the triple jump at 36 feet, 4 inches, with Lauren Lane in at sixth place at 33 feet, 11 inches.

FHSU won the team title with 216 total points in the ten-team field.

The Tigers are back on the track April 5-7 as they travel to Maryville, Mo., for the MIAA vs. NSIC Showdown.