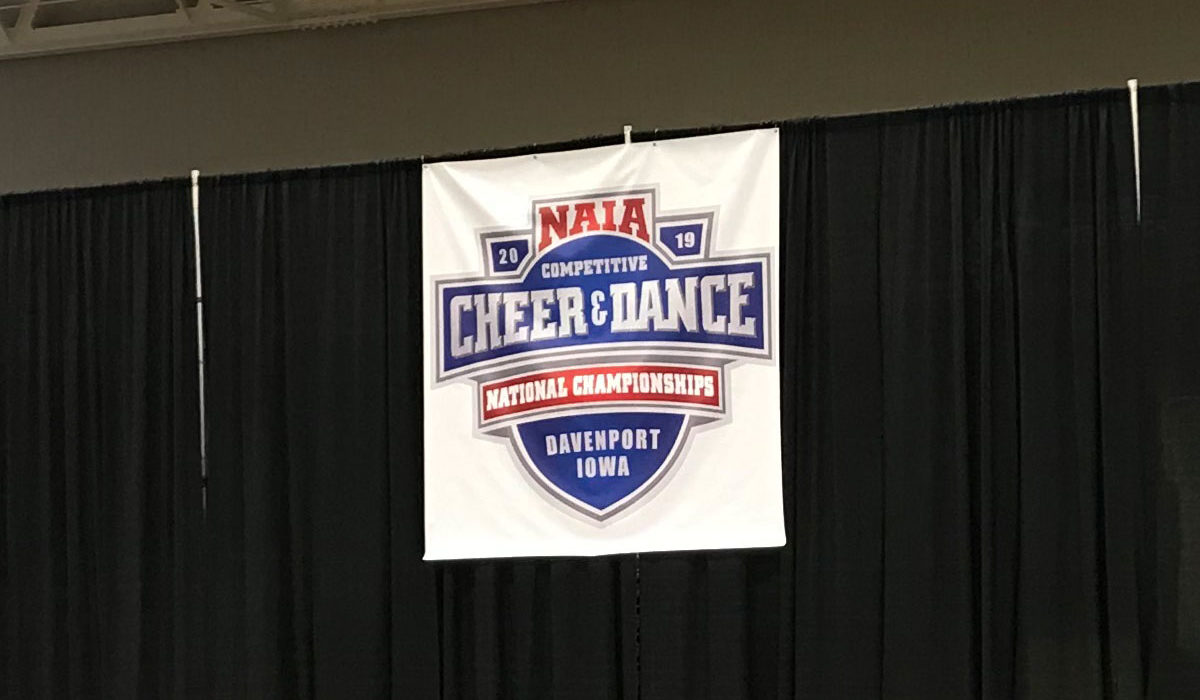 The NAIA is the only national athletic organization to offer national championships in competitive cheer and dance as recognized sports and this is the third year for this event.

St. Ambrose University hosted the championships this Saturday in the first of a two-year deal. The SAU staff took care of fans, attendees and competitors and expedited well the business of the day each day. And the Lee Lohman Arena had plenty of space for the groups to warm up and get ready for performances. However, the competition venue did not.

Only the bleachers on the south side of the gym were available, due to the way the court was set up for the competition. With seat-back chairs and bleachers, there was a seating capacity of 456. Additional temporary bleachers were brought in to seat another 126, bringing the total to 582. But there were more than 800 fans in the gymnasium both Friday and Saturday. Add this number to the number of competitors, coaches and staff who were watching other performances, and there were many people standing or sitting crowded on the floor.

There were other issues which had much more impact on the competition itself involving the music played and the judges themselves.

In a competition like this one, there is music that accompanies each performance. The total running time of the music played has to fall within a certain window – in this case, the minimum is 1:45 and max time in 2:15.

On prelims day, when the University of the Cumberlands performed its cheer team’s routine, the music was not quite right. But the team couldn’t just stop midway through. Once it had started, they continued.

The group did its entire performance with the audio accompaniment and then walked off unceremoniously at the end with no set ending. One of the girls who performed looked at the crowd and said, “That’s not our music.”

Corissa Dyer, head coach of the UC cheerleading program, expanded on that statement.

“I couldn’t be more proud of how they performed with the circumstances that were given to them,” Dyer said. “Their music actually documented at a time of 2:07 when it was turned in. But after (the prelim performance), I ran over to the D.J. real quick and it was a 2:27 routine. So the music was 20 seconds longer than it should have been.

“That’s hard to perform a cheer routine at that slow a pace. Luckily, they were all on the same page to go with their own counts and to keep going and hit a perfect routine with zero deductions. There were a few timing mess-ups at the beginning because that’s when they were realizing that wasn’t their music, but once they all got on the same page, it was good one.”

Dyer said she wanted to speak to the head judge because she was first worried about a time deduction, as the new time is 12 seconds beyond the limit.

“My second concern was that although we hit a solid routine, they were a little frazzled. They were all looking at each other like deer in the headlights. I don’t know if we were given the option, but I didn’t know if I wanted to push to do the routine again, gambling since we hit our first one.

“Overall, my team is really proud of the way they performed. You know, they were a little let down. You work all year to come a national championship event and that’s a let-down. These teams have been working since August, and for that to happen in the prelims… Luckily we checked it (the music) twice before finals.”

UC was in 10th place after the prelims and finished sixth overall in cheer.

At least one more team had a similar issue. Oklahoma City University’s dance team’s music was altered as well. But it wasn’t slowed down.

OCU dance team coach Tasha Hinex confirmed that the music played during her team’s preliminary competition performance was more than six seconds shorter than the music that had been submitted. It had been sped up.

This means her team had to perform its routine in less time than that it had been practicing it for months.

OCU was in sixth place following Day One and finished the competition in fifth place.

A side-by-side comparison of the two performances from the weekend with music at different speeds can be viewed HERE.

The judges were another point of interest during this event. Not the judging, necessarily – although because judging has a subjective tone to it, there will always be some difference of opinion as to how things are seen. No, not the judging in this instance, but the judges.

Andie Stitt was listed as the head judge for the dance competition.

She choreographed the dance routine used by Baker University for this season. Baker competed as one of the 12 teams in the 2019 national competition.

She was a judge in the Southeast Region qualifying competition, in which Baker competed to get to advance to nationals.

The optics of this are terrible. One of the categories to be judged is choreography (Section D.1.g in the 2018-2019 NAIA Competitive Dance Rulebook). Here is a list of things that are now at play at the national competition. If:

I only have the best things to say about this team!!! So fun to come in and work with you all for a short time last night! Y’all killed it and I’m so amped to see you do this choreography! Plus, I got to see my babies @ayyyee_keke and @g_chambers98 ! Missed y’all! ❤️❤️❤️ thanks for having me @bakerdanceteam

This is not to formally say that something has been done wrong. But again – the optics. This is not a good look.

On her Instagram account, Stitt has pictures with other teams for whom she has done choreography. However, none are with any of the other teams at the 2019 NAIA national competition.

A last thought is that with four (or more) judges for cheer or for dance, it might be in order to have judges from each of the four regions.

In the dance category, three of the four regions were represented, and in cheer, two of the four, according to coaches.

It was an exciting weekend to watch once again and there are opportunities to make this event better in the future.